You are here: Home › The Beatles Connection

A community event at St Peter’s Church, Woolton, on July 6th 1957 produced a moment of magic; one that went on to change the world. 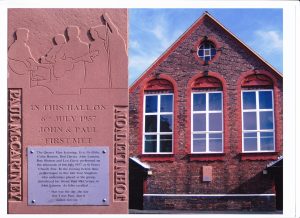 the most important meeting in popular music history” is how the first meeting of John Lennon and Paul McCartney has recently been described. The meeting took place at St Peter’s Church Hall on the evening of Saturday, 6th July 1957… Whilst waiting to play at the church dance that night, John Lennon and the other members of the Quarrymen Skiffle Group were introduced to the young Paul McCartney by a mutual friend.

The historic meeting was only brief but in just twenty minutes Paul demonstrated his musical ability, playing rock and roll classics and even showing the impressed Quarrymen how to tune their instruments. Two weeks later Paul accepted the group’s invitation to join the group. Of the meeting, John later famously commented, “that was the day, the day I met Paul that it started moving”. Equally as well known is the grave of Eleanor Rigby, featured in the 1966 Beatles’ song, and found in the churchyard. Also in the churchyard, and often overlooked by the numerous visiting Beatles fans, is the grave of John’s uncle, George Toogood Smith. After the breakdown of his parent’s marriage when he was five, John lived locally with Uncle George and Aunt Mimi. It was George who brought John his first musical instrument, a harmonica. Whilst Aunt Mimi was a regular member of the congregation, John’s visits to church were less frequent but he was a member of the youth group and sang occasionally in the choir at weddings.

We’re in the process of collating Beatles information for our site. If you have any information you could add, please email us [email protected]

Have a look too at our ONLINE SHOP for unique Beatles-related gifts!